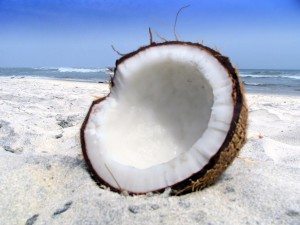 A randomized, double-blind clinical trial involving 40 women aged 20-40 years who had waist circumferences greater than 88cm (greater than ~35in) compared the effects of coconut oil and soybean oil on markers of belly fat and risk of heart disease (1).

The women were split into two groups of 20. All women were instructed to follow a balanced low calorie diet and to walk for 50 minutes per day.

At one week prior to intervention, body mass index, waist circumference were measured in both groups. Fasting glucose, triglycerides, total cholesterol, LDL/HDL fractions, ultra-sensitive CRP, and insulin, and HOMA-B% and HOMA-S (measures of heart disease, inflammation, and insulin sensitivity) were also determined. The initial measurements revealed no statistical differences between the two groups of women.

The groups were then given 30mL (roughly 2 tablespoons) of either coconut oil or soybean oil per day for 12 weeks. One week following the 12-week trial, the profiles were reexamined.

The group receiving soybean oil exhibited an increase in total cholesterol, LDL, and LDL:HDL ratio (p<0.05 for all), and decreased HDL (p=0.03), and no significant change in waist circumference. Despite the small sample size, findings suggest that coconut oil may have a favorable effect on blood lipids and support a reduction in abdominal obesity when compared to soybean oil.

The study loosely supports past research suggesting coconut oil’s neutral or even protective influence on lipids, as well as its potential thermogenic (metabolism-boosting) properties.

A more robust study is needed to further evaluate the controversial effect of coconut oil and related fats on measures of obesity, cardiovascular disease, and energy metabolism in both men and women.