A recent meta-analysis concluded that dietary fat is not significantly correlated with coronary heart disease or cardiovascular disease (1).

It is well-known that saturated fat intake will increase both Total Cholesterol as well as Low-Density Lipoproteins (LDLs) or “bad” cholesterol.

It is just as well-known, yet less publicized, that saturated fat intake may also:

So while the last century of diet guidelines have focused on the correlation of saturated fat, LDL’s, and Total Cholesterol with heart disease, eating a diet high in saturated fats may actually be heart protective.

While saturated fat intake undoubtedly increases LDL’s and Total Cholesterol; its beneficial effect on other markers of heart disease may even be more profound.

The net “beneficial” effect may go counter against everything you have learned up to this point about saturated fats, cholesterol, and their proposed links to heart disease.

What if Fat Didn’t Cause Heart Disease?

The research community has largely ignored evidence with regards to the potentially healthy effects of saturated fats on Lp(a), HDL, and the Total Cholesterol: HDL ratio.

Instead, much of the research has focused on saturated fat intake and its association with high LDLs. Since high LDLs are considered a risk factor for heart disease, researchers have prematurely jumped to the conclusion that saturated fats are to blame.

Our understanding of the connection between LDLs and Heart Disease has also been adapted. We know now that different types of saturated fats and carbohydrates have differential effects on LDL size and particle number.

Heart disease is not necessarily associated with total LDL’s, but it is definitely associated when there are numerous LDLs that are more “small and dense” in size. The larger, “fluffier” LDLs may be heart-protective (9). You may have high LDLs, but the majority of them may be of the protective, “large and fluffy” variety. On the flip side you may have “normal” levels of LDLs, but the majority of them could be of the risky, “small and dense” variety.

It is these findings that may help explain why 50% of 136,905 individuals hospitalized with coronary heart disease had “normal” levels of cholesterol, HDL, and LDL at the time of their hospitalization (10)

LDL particle number is now accepted as one of the strongest markers of heart disease risk – potentially even more than traditional markers like total cholesterol and LDLs (11).

What does the research say about this?

When you choose to lower saturated fat intake, you have to balance the “improvements” in LDL numbers with the negative effects on levels of  HDL and Lp(a), (12).

Clinicians and researchers alike are now challenged with a broader picture of heart disease risk than what we’ve been taught over the last century.

So this brings up the lingering problem…

The America Heart Association still recommends a diet that is comprised of only 7% or less calories from saturated fat (13), and interestingly, it has given less clear guidance as to what to substitute the saturated fats with.

If saturated fats are so bad for you, what are we supposed to substitute them with?

The underlying assumption appears to be that PUFAs are associated with lower levels of LDLs and, therefore, are correlated with less incidence of heart disease, ultimately concluding that PUFAs are heart protective.

As we know from my earlier discussion, however; the widely accepted correlation between LDL levels and heart disease is not cut and dry – yet researchers still make the assumption that LDLs are bad, citing the same correlative research articles over and over again.

Again, this is just a correlation, and the potentially healthy effects of dietary fats on HDL, Total Cholesterol: HDL and Lp(a) were still largely ignored.

But here’s the real reason why I bring up the debate of whether or not we should substitute saturated fats with more PUFAs:

The authors proposed that the higher intake of PUFAs was associated with increases in oxidized metabolites (which make up most of the fatty acids in oxidized LDL). Nevertheless, their findings went counter to previous assumptions in the literature; and the authors were careful to indicate that the trouble with PUFAs may stem from when they are consumed in processed foods rather than when found naturally in whole foods such as nuts and vegetables (17).

It gets even trickier when you consider that oxidized LDLs are a major proposed cause of atherosclerosis. When you look at the composition of arterial plaques, they are not actually comprised of oxidized polyunsaturated fats, NOT saturated fats!

As the researchers noted, excess polyunsaturated fat consumption is nearly impossible to achieve with a diet of whole foods, and suspected to be a result of eating high amounts of refined and processed foods.

So it would appear that more focus should be on reducing refined carbohydrates and added sugar, and increasing intake of whole foods, instead of reducing intake of dietary saturated fats. 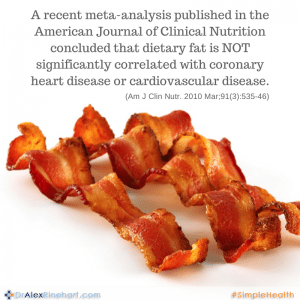 When you substitute carbohydrates for saturated fat, little to no benefit is seen in reducing heart disease risk unless the carbohydrates added are unrefined and have a low glycemic index (20).

We also know that independent of substituting saturated fats or not, high intake of refined carbohydrates is clearly associated with risk of type 2 diabetes and ischemic heart disease (22); and further, researchers suggest that even if we decided that saturated fats are risky for heart disease, the effect of high intake of refined carbohydrates may cause even worse metabolic damage (23).

There is no question that LDLs are associated with higher levels of heart disease. But as we’ve established, the story goes deeper when it comes to saturated fats and cholesterol, LDLs, LDL size, LDL particle number, HDLs, Lp(a), Total Cholesterol:HDL ratio, and subsequent risk for heart disease.

First, cholesterol intake actually has little to do with cholesterol levels in the bloodstream.

Additionally, as reviewed earlier, the research now suggests that saturated fat intake may have a greater beneficial effect on HDLs, Total Cholesterol:HDL, Lp(a), and LDL Particle Size and Number. When you substitute saturated fat intake with refined carbohydrates and other processed oils high in PUFAs, you may actually be increasing your health risk.

So why does such confusion still exist and repeat itself?

The problem may be in our means of measuring saturated fat intake in the first place.

Hamburger and french fries, bacon and hashbrowns, pepperoni pizza. When research subjects fill out food frequency questionnaires, a check for “hamburger” is a check for saturated fat. But what do we eat hamburgers with? Typically a white, refined carbohydrate bun, along with a high sugar condiment like ketchup!

According to the FFQ analysis, it was just a hamburger full of “disease-laden” saturated fats. The “white bread” and “condiment” part tends to be ignored.

Additionally, not all studies control for processed vs. unprocessed meat as sources of saturated fat.

One study did show an association between processed AND  unprocessed meat with stroke mortality, but the analysis was still assessed by a FFQ (24).

An additional study made a really interesting observation, however.

It looked at total cheese intake and the use of butter in cooking (high sources of saturated fat).  They failed to find an association with heart attacks for both. But the most interesting part was that when they controlled for “how” the butter was consumed, when it was consumed on bread, it was positively associated with heart attack risk (25).

So when you just measured butter intake alone, no association. When it was controlled with use on bread, there was an association. Seems more like an argument against grains.

The NY Times and other publications sent the media on a fury announcing a new proposed link between red meat and heart disease.

The researchers found that those with eating red meat were metabolizing its carnitine content into trimethylamine-N-oxide (TMAO). The study also showed a correlation between TMAO levels and heart disease risk. The media concluded that a new link between heart disease and red meat had been discovered; yet flaws in the association quickly surfaced.

One of the highest natural sources of TMAO is fish. TMAO is actually the chemical that gives fish its  “fishy” smell. Fish intake has largely been associated with heart disease protection! That was the first glaring problem with their analysis.

The second problem took a little deeper analysis. The mechanism for the conversion of carnitine to TMAO proposed by the researchers was the presences of certain species of bacteria in the gut.

So what does this have to do with grains?

When you actually look at what increases the levels of the specific Prevotella bacteria in question, it is suggested to be a result of a high-grain diet!

The media could have just as easily (and with more scientific soundness), that a new link was discovered between heart disease and grains.

Forbes magazine jumped on the media firestorm with a scathing article entitled: […] Why You Should Never Believe Health Headlines.

Take-Aways From the Diet-Heart Disease Hypothesis

1.) Saturated Fat and Cholesterol may not cause heart disease. They may actually be heart protective.

4.) Be cautious of processed polyunsaturated fat (PUFA) oils that have been used to substitute saturated fats in our diet. PUFA-based oils may increase risk of vessel damage from oxidized LDLs. Be particularly when these oils are:

The low-fat “diet–heart hypothesis” has been controversial for nearly 100 years. The low-fat–high-carbohydrate diet, promulgated vigorously by the National Cholesterol Education Program, National Institutes of Health, and American Heart Association since the Lipid Research Clinics-Primary Prevention Program in 1984, and earlier by the U.S. Department of Agriculture food pyramid, may well have played an unintended role in the current epidemics of obesity, lipid abnormalities, type II diabetes, and metabolic syndromes. This diet can no longer be defended by appeal to the authority of prestigious medical organizations or by rejecting clinical experience and a growing medical literature suggesting that the much-maligned low-carbohydrate–high-protein diet may have a salutary effect on the epidemics in question.

Other Diet and Heart Disease Resources: