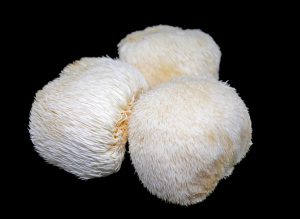 You’ll find that gut and brain issues are linked through the vagus nerve, compounds released by the gut into the blood, and through modulation of inflammatory cell messengers. Strategies that help the gut tend to help the brain and vice versa.

I have struggled with gastritis in the past, as well as relatively severe problems with mental focus following a bout of acute mold toxicity – I find that when I take Lion’s Mane, it clears my mental fog like windshield wipers.

I like using Lion’s mane for gastrointestinal health too. It supports GI integrity as part of a complete gut lining and mucosal repair program. One of my secrets to gastrointestinal healing is the role of the enteric nervous system – and promoting health of the vagus nerve.

Nerves to the gut can be irritated and weakened by sugar, infections, and more. Lion’s mane helps repair nerve tissue in the gut (along with benefits to GI mucosa) which brings us to the next section….

Lion’s mane may play an important role in the prevention of Alzheimer’s and Parkinson’s diseases. Studies have shown that mushroom extracts like those found in Lion’s mane reduced neurotoxicity, stimulated nerve growth, and had neuroprotective, antioxidant, and anti-inflammatory properties (6).

While other mushroom extracts have shown regenerative potential,  Lion’s mane has the most extensive research for its nerve health benefits. While mushroom supplements like Reishi and Cordyceps are very energizing – Lion’s Mane side effects should not contribute to insomnia. Most turn to Lion’s Mane to help you study or work a little later into the night. When you’re ready to sleep, Lion’s mane shouldn’t give you trouble.