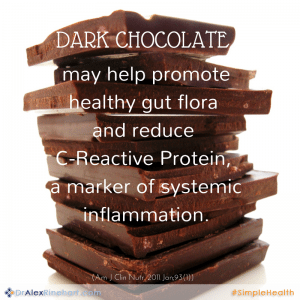 What does dark chocolate have to do with apples, red wine, green tea, onions, and cranberries?

Once you take a peek at the inner health benefits of dark chocolate, you will be pleased to know that not all nutrition news has to be disheartening for your palate.

Flavonoids are a specific subset of anti-oxidants and polyphenols that may be associated with health benefits including cancer prevention, cardiovascular disease, digestive health, and immune balance.

Flavonoids have been also suggested to exhibit anti-inflammatory, anti-cancer, anti-hypertensive, and anti-aging properties (1; 2; 3).

A Piece of Chocolate a Day Keeps the Doctor Away?

As much as 10% of the dry weight of cocoa beans and dark chocolate is actually made up of polyphenol compounds (4).

In addition to flavonoids, cocoa beans contain other antioxidants such as catechins, epicatechins, and proanthocyanidins that may also account for some of the health benefits.

Flavanols can account for some of the bitter taste found in pure chocolate. But the more processed and palatable a chocolate product becomes, the more the health value may actually be lost.

Because of the diversity of cocoa beans and cocoa-derived products, it is unlikely that specific health claims regarding consumption will be made any time soon (5).

Meanwhile, the research keeps piling up…

In 2010, the New York Times reported that moderate intake of chocolate throughout the week or month was associated with a lower rate of hospitalizations and death from heart failure.

But before you run and stock up on your 85% cocoa bars at the grocery store, the emphasis in the study was moderation.

The study noted that the protective effect was not observed for individuals consuming one or more servings of chocolate per day (6).

So for now, the research suggests just sticking to a few squares of dark chocolate per week.

What else is the research saying…?

Chocolate may affect cancer growth in a number of interesting ways:

A 2006 study published in the European Journal of Cancer Prevention, demonstrated that cocoa extracts may offer an anti-proliferative effect on the growth of prostate cancer cells (7). A later study in the same journal also supported a reduction in prostate tumor incidence in rats fed cocoa powder (8).

The most supportive evidence for the positive influence of dark chocolate involves the influence of its chemical components on the cardiovascular system (19).

In his article “More Good News About Chocolate” world nutrition expert Dr. Andrew Weil asserts that chocolate can help lower blood pressure, improve the function of blood vessels, and even lower levels of insulin. But the proposed benefits do not stop there…

Although the research looks promising, it is important to note that health benefits are more consistently associated with dark chocolate, as milk chocolate may contain proteins that inhibit flavonoid absorption (41).

For the support of general wellness, I believe that eating one to two ounces of high-cocoa dark chocolate a few times a week can be an enjoyable way to add variety to your food plan and take advantage of its potent health benefits.