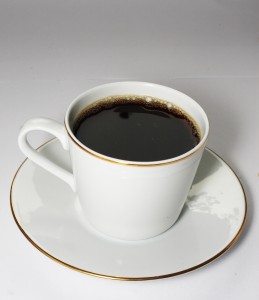 Two to four cups of coffee (3-6 mg/kg of caffeine) consumed before or during endurance exercise is well supported to enhance performance through direct effects on the muscle and nervous system (1, 2, 3, 4).
Studies have shown:

Side Effects of Caffeine Intake

Caffeine used to be banned by the International Olympic Committee, but as of 2004, it is no longer a banned substance as set by the World Anti-Doping Agency.

However, even though upper levels have been previously set by doping control agencies, performance benefits had still consistently associated with even low to moderate intakes of caffeine below the set thresholds (6).

Caffeine intake for athletic performance brings up issues of individual tolerance, sport politics, and effects on sleep, hydration and refueling (2).

There are also concerns of increased potassium loss, altered digestion, and poor absorption of certain nutrients associated with coffee and caffeine intake. Side effects may include headaches, dehydration, anxiety and muscle cramping.
Over time, caffeine consumption may cause and/or worsen stress-related fatigue.

Studies suggest that only one to two cups of coffee may be needed to improve performance.

For individuals who consistently drink three or more cups a day, it is recommended that you discontinue coffee consumption two to seven days before drinking it on the day of your event as you can build a caffeine tolerance (12).

It is important to respect that responses vary by individual as some individuals have genetic markers that make them less adept at detoxifying caffeine and are extra sensitive to even low intakes of caffeine.

Additionally, you might like to add sugar and cream to your coffee that may cause confounding effects.

One study showed that caffeine alone had a better effect on performance than when the caffeine source was combined with carbohydrate (3).