This is Your Brain on Bacon 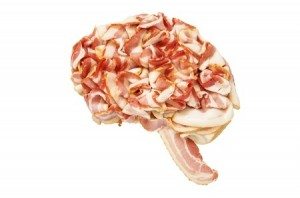 One popular myth that I like to dispel is that fat is unhealthy.

Typically these diets both eliminate processed food and added sugars while capitalizing on nutrient-dense foods such as vegetables and high-quality meat and fish. Thanks to decades of lobbying from the vegetable oil industry (corn and soy in particular) as well as the pharmaceutical industry (ex. statins to lower cholesterol), fat has been given a bad name.

But there’s more to high-fat diets than just weight loss.

One of the reasons why this myth rubs me the wrong way is that fat and cholesterol are so important for brain health. In fact, nervous tissue such as the brain is comprised predominantly of fat. Fat is what helps insulate our nerves, and when converted to ketones, is an efficient and protective energy source for the brain.

Sugar on the other hand leads to oxidative stress and inflammation, and although it is the main energy source for the brain aside from ketones, it can cause a lot of damage along the way.

David Perlmutter MD, one of the leading neurologists in the country has an “Anti-Alzheimer’s Trio” that he recommends on his blog and in his lectures. What are the three ingredients for optimal brain health?

High-fat diets increase the utilization of ketones in the brain. Dr. Perlmutter asserts that these ketones such as “beta-HBA” are being recognized as “superfuels” for the brain.

Ketones are the only alternative fuel source that the brain can utilize aside from glucose. Too much glucose in the brain has been pointed at as a cause for many of neurodegenerative problems seen today.

Alzheimer’s has been theorized to be a “Type 3 diabetes” – and ketogenic diets high in fat and protein and low in carbohydrates can help promote better brain health. While numerous anecdotal reports exist, new research will soon be published that supports a positive benefit for Alzheimer’s disease in those consuming coconut oil.

Factors leading to oxidative stress, inflammation, and altered sub-types of LDL and HDL have more to do with heart disease risk. One of the worst things you can do for your health is have too little cholesterol. Even if we were to make the assumption that these factors are damaging, other fats such as Omega-3s (also deficient in American diets) can be protective, and more importantly, the metabolic damage from sugar and carbs appears to be worse.

25% of the body’s cholesterol is found in your brain where it helps improve cell function and provide antioxidant protection. It also serves as a raw material for many of your hormones that are important in whole body health. For instance, the second most common side effect of statin drugs is cognitive deficits which may reflect a reduction of cholesterol in the brain. One of the most exciting natural treatments for improving brain health is adding more fat to your diet and promoting a state of ketosis.

A high-carb diet typically involves hard to digest grains such as wheat, as well as high amounts of processed food. If you are sensitive to wheat, which many Americans are, it can cause silent inflammation in the gut and the brain. This sensitivity can lurk underneath the surface without you knowing. Many symptoms are not even related to the gut and the gut itself does not register pain until damage progresses to deeper levels of the gut surface. You may have heard that inflammation can cause “leakiness” in the gut, where poorly digested proteins enter the bloodstream and cause inflammatory reactions with your immune system elsewhere.

What is often overlooked is that when this is happening, the blood-brain-barrier is “leaky” as well, creating neuro-inflammation, and resultant neuro-degeneration. If you have ever experienced “brain fog”, then you understand how this link can manifest in symptoms well before Alzheimer’s disease or more serious cognitive impairments ever appear.

One of the most overlooked factors with gluten sensitivity is that you do not always have gut symptoms. Many individuals will have hidden neurological inflammation that can linger on for years. Alzheimer’s disease doesn’t happen after your 60’s, it begins in your 20’s and 30’s. While it may not be causing objective symptoms,  it may be disturbing the healthy balance of bacteria and yeast, as well as disrupting mood and neurological health.

Over time, this can make a significant difference in the way nutrients are absorbed as well as whole body health.

Another issue with “leaky” guts and brains is that infectious microbes and their toxins can enter the brain causing their own source of oxidative stress and inflammation – implicated in general cognitive decline, Alzheimer’s disease, and dementia,.

When you promote ketogenic diet with high fat and protein, you starve the bacteria and you actually promote a healthier immune response. Ketones produced in a low-carb diet are healthy!

“Low-Carb” can still be misleading as I do not support “Atkins”-like diets. I support eating as many carbs as you want when they come from leafy greens and other vegetables. I use fruit and starchy vegetables in line with my exercise levels. The more exercise and the higher its intensity, the more carbs that you need and can safely absorb into your diet.

What can we conclude about fats and brain health?

So go have your bacon, and eat it too.