Could an Insect-Killing Mushroom Be Healthy to Humans? 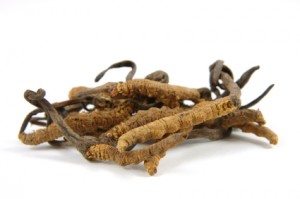 Cordyceps mushrooms have been used for thousands of years and are one of the most popular herbs used in my practice.

I have a love-hate relationship with mushrooms.

They grow in weird places.

And, they eat weird things.

This species of mushroom will actually invade an insect, turn it into a suicidal zombie by causing it to climb and attach itself to a plant. Then the mushroom will actually sprout growth and launch its spores directly from the dead insect’s body. The spores then affect other insects, sometimes killing entire colonies.

It might sound like something out of a sci-fi flick, but I’m actually talking about  Cordyceps mushroom.

You will often find it in anti-stress herbal combinations and like most natural therapies, Cordyceps’ popularity is rapidly growing.

Here’s a list of the WIDE health benefits that can be found in the research literature for cordyceps:

And for you science geeks like me, the bioactive compounds include 3’-deoxyadenosine/cordycepin, cordycepic acid, ergosterol, alpha-aminoisobutyric acid and Cordyceps polysaccharides (11; 12)  which are thought to contribute to the health benefits of cordyceps extracts.

Cordyceps has also been used to support exercise performance with limited support from at least one double-blind, placebo-controlled trial of older adults (13; 14), but other studies with cyclists have not been as promising (15; 16).

Despite the mixed results, Cordyceps is often paired with Asian ginseng and/or Rhodiola root which both have more promising evidence for a role in sports performance enhancement.

There is also early support for use of Cordyceps to support childhood asthma, but more research is needed (17; 18).

Cordyceps has so much to offer when it comes to your health, and it’s one I personally take in my daily regimen through a few products from Host Defense Mushrooms

So you might think mushrooms are a little weird, and you may still not want to eat them, but you may be willing to try one as a supplement.

Although ants and wasps would disagree, Cordyceps appears to be a great place to start.