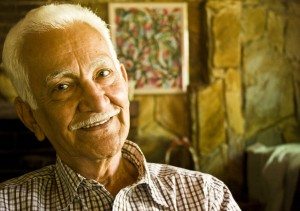 The oldest babyboomers started hitting age 65 in 2011, and there’s no turning back for all 79 million of them. It’s scary, because we turn our backs to the elderly we already have.

Health problems follow age, and the children of the baby-boomers are left increasingly responsible for caring for both their own children and their aging parents.

To say our health system is ill-equipped to deal with aging Americans would be an understatement. This issue is very close to me as I watched both my late grandmother and grandfather struggle to have even their most basic needs met – most notably bathing, using the bathroom, & eating.

My mother in particular, lost work time, tried taking her mother into her own home, put her own health and well-being at risk, to be an advocate so that my grandmother could receive the best and most humane care possible. The demands were just too much, she had to give up control: she felt guilty, overwhelmed, stressed, and angry, but it wasn’t her fault.

Let me say that again – It wasn’t her fault.

The problem with care for the elderly in this country is that we have a system that overlooks needs of wellness, once a disease is present. Muscle aches and pains are given less attention, rehab protocols are designed to fulfill the needs of insurance reimbursement, not patient needs. The need for socialization and mental activity – forgotten. Clinical nutrition is viewed as useless, & even laughed at.

I watched nurses and aides go directly against diet restrictions set by doctors and family. In their defense, they are trying to do the residents a favor by sneaking them a snack or an extra cup of pudding, but it’s misguided. A hospital is a place of healing. We will stick people with needles, open up their chests with bone saws, ram rods through their hips, yet we balk at being a little aggressive with food choices?

I wrote a letter in disgust (professionally, may I add), only to receive a demeaning letter saying  politically correct bullshit on how the diets are designed by trained dieticians to reflect regional tastes & consumption patterns (excuse my passion, but isn’t most chronic disease is being caused by those “regional tastes and diet patterns”?). I wrote down dates and times, I took down names, I wrote letters…Nobody was held responsible, and nothing ever changed. It infuriates me to this day. I did what I could, but I am only one person.

Carrying the Last Burdens of Change

We are suffering & approaching national bankruptcy because of our lack of appreciation for wellness in this country – whether it’s physical, emotional, spiritual, or even financial bankruptcy- we systematically refuse to take a proactive approach.

We refuse to accept the notion that it’s actually easy to solve problems that never end up existing in the first place.

So if you are currently a caregiver, and you find yourself nodding your head in agreement, from the bottom of my heart, I’m sorry. I’m sorry because we are a country that waits until the very last minute to act. Right now we have only scratched the surface and the real battles are coming, and you guys are the ones with the job of carrying the last burdens.

I celebrate each and every one of you for your courage, conviction, and passion to make things right.

So many caregivers like my mother work tirelessly until they have no other choice but to give up the reigns of care to a nursing home or skilled nursing facility. Caregiving is a twenty-four hour, 365 days a year process.

So many of us have experienced similar stories, but few are talking about it. Be angry, but be angry in constructive ways. Blame the system, not the individuals. It makes it easy on companies to let a few heads roll (whether guilty or innocent), and fight tirelessly on their part to preserve the current system.

Nursing homes and assisted living facilities are chronically under-staffed. Workers are underpaid and buried in paperwork, and its a dog-eat-dog world of pointing fingers and cover-ups when accidents, falls, and unexplained deaths occur. And the food, let’s not even go there.

What it comes down to is that even the most basic needs of human dignity are lost for many of our elderly Americans. I have spent plenty of hours volunteering in nursing homes growing up, and while there are amazing nurses and aides…they are outmatched by the drastic gaps in a failing health system – and, as much as I’d like to be encouraging, it’s only going to get worse.

I have seen red lights flashing for 20-25 minutes without attracting the slightest attention of staff, residents lying in their own feces or urine, nurses forgoing responsibilities because “the next shift will take care of it”.

Aides will leave residents pants down so that future bathroom visits are less of a hassle. Residents are encouraged to stay in their rooms instead of going to the cafeteria or dining room to eat…to save the nurses and aides the hassle of transporting them.

Whether you want to or not, many of us will find ourselves living to our 90’s and hopefully even much longer than that. Like a terminal cancer, some of these occurrences are just natural parts of the process. Accept that there will never be enough funding, enough staff,  or enough systems in place. And that might sound a bit depressing, but the good news is that when it finally gets bad enough, change will have to come.

Might Chronic Wellness have a role to play in that change?